Next in line on Blind Audition of The Voice of the Philippines Season 2 November 8, 2014 episode was Rence Lee Rapanot, 21 years old, from Cavinti, Laguna. This artist was very devoted to his family and has a deep love for Filipino music. Rence lived in a rural area of Laguna and since he was a kid, he knew how to labor at the farm.

When The Voice Team visited him, he didn’t have any idea about the surprise that they brought for him. Rence watched through a tablet the video of host Lucky Mansano saying that they will make his dreams come true. 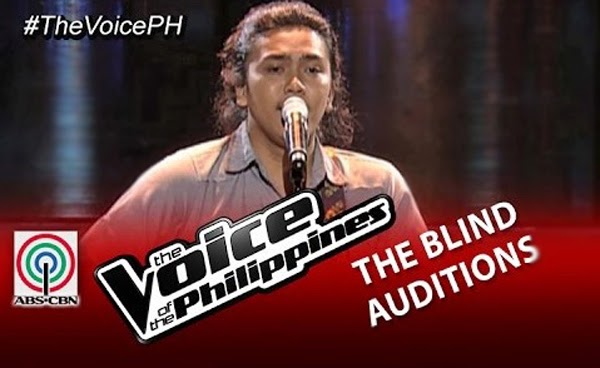 After that, Rence received a red envelope containing an invitation from The Voice that made him emotional.

Rence said that he observed a lot of Filipinos who were patronizing foreign songs including K-pop and that was one of his reasons in accepting the invitation of joining the reality singing contest.

He wanted to show to the world how good it is to sing and listed to OPM. With his guitar, Rence performed an OPM song from Dong Abay entitled “Mateo Singko.”

The first two coaches who turned their chairs were Coach APL and Lea. Coach Bamboo was the third to turn his chair and before the song ended, Coach Sarah was convinced with his performance making him the first four-chair-turner of the episode.

All of the coaches gave their appreciation to Rence and after doing their best to convince him, he still had to choose one particular coach to whom he will be spending his time to be trained. And that coach was Bamboo. Rence became a member of Team Kawayan.

Street Children Allegedly Being Rounded up and Caged to ‘Tidy-up’ the...

ofw-admin - January 16, 2015 0
Government
After much publicity Pope Francis’ visit gain from the media, equally disappointing stories emerge. One of which is the condition of street children being...

ofw-admin - December 23, 2014 0
local
A video of a Pakistani Taxi driver engaging in a conversation with his passenger using Filipino language is gaining attention from netizens. The three-minute...

ofw-admin - February 15, 2015 0
local
With the Valentines Day just around the corner, many girls would love to have their man serenade them, however, in a circulating video Facebook...

ofw-admin - December 31, 2014 0
celebrity
If you are a celebrated movie star who has done countless hit movies and television series, how would one of your most important videos...

ofw-admin - September 10, 2015 0
celebrity
The latest evictee of Pinoy Big Brother 737 were Mikee Agustin Charlhone Petro and Krizia Lusuegro. They are regular housemates which was evicted last...