Last but not the least performer on the November 23, 2014 episode of The Voice of the Philippines Season 2 was Poppert Bernadas and he was the only 4-chair turner. Poppert is an experienced stage actor who is known to Coach Lea for being part of Ryan Cayabyab’s singers. This only prove that Poppert is someone to look forward to. 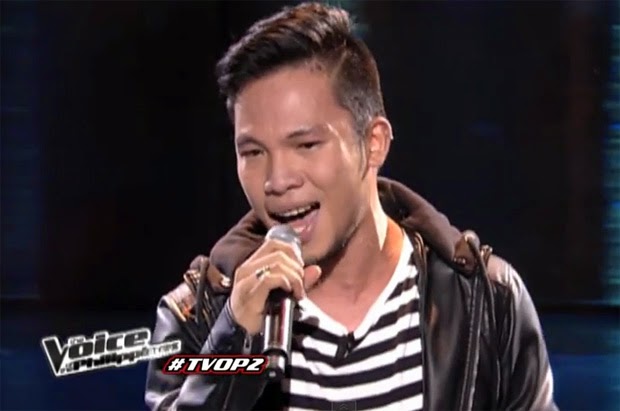 Poppert performed the male version of “Luha” from Aegis that made the four coaches turn their chairs. There was no reason for the coaches not to turn their chairs because of the artist’s noticeable gift in singing. Poppert impressed everyone by his high range of voice, as if there is nothing to change about it. The song turned emotional when he sang it and when Coach Lea recognized him, she was shocked.

For the record, Poppert said that he is “mama’s boy” and this was his desire for his mother who is currently undergoing dialysis procedure. Poppert was so excited to perform for his mother who was so proud of him. After Poppert’s performance, it was hard for him to decide who among the coaches he will belong to. All of them offered themselves but in the end, Poppert chose Team Sarah.

Sarah cannot believe that he had Poppert in her team. When she approached and hugged Poppert, Coach Lea went with her to congratulate Poppert. Like I said, if there is one artist that we should look forward to in the next episodes of The Voice of the Philippines Season 2, it would be Poppert.