The first artists who entered the Blind Audition of The Voice of the Philippines Season 2 November 8, 2014 episode was Demi Fresco. Demi was a 16-year-old student of Conservatory of Music major in Music Theater from Sultan Kudarat.

Demi’s father works as school administrator on the same school where Demi studied pre-school to high school. Since she finished as class valedictorian, she was rumored to have received the award due to the fact that she was the daughter of the administrator and that was also according to them the reason why she won in different contests. These things were Demi’s motivation in joining The Voice; in order to prove them wrong of what they were claiming. 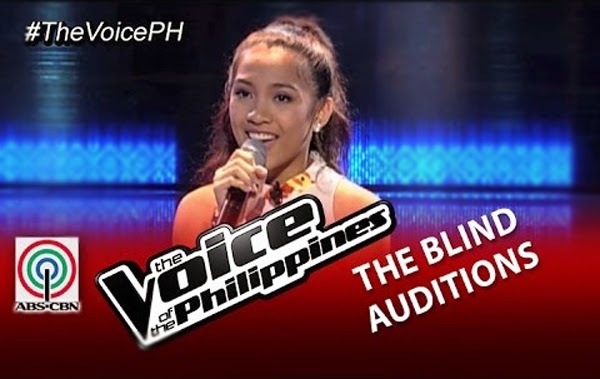 Demi chose the OPM hit “Ikaw” as her piece during the audition. On the performance proper, she started singing the chorus part that instantly got the attention of the coaches. When Demi reached the highest note of the song, Coach APL was convinced and pressed the button. This made Demi more confident of her performance. Before Demi’s performance ended, Coach Sarah and Coach Bamboo turned their chairs that made this young artist a three-chair-turner. The convincing was for the three coaches to make to make Demi part of their team.

Coach Lea explained her part why she did not turn. She said that technically, Demi had the tool. The only thing was she felt heavy with her vibrato at the start but she didn’t mean the she was not talented.

Demi was able to view at the VTR the video of the former semifinalist in The Voice Season 1 Jessica Reynoso to whom she was compared. In the end, Demi chose to belong to Team Sarah.