Carol Leus is a 24-year-old artist from Batangas who tried her luck convincing the coaches on The Voice of the Philippines Season 2 Blind Audition November 15 and she made it.

Just like some of the artists who joined the competition, Carol already had lots of experiences joining singing competitions. Her dad was the one who pushed her to develop her singing skills since she was young. Because of this, she was able to join choirs in school. 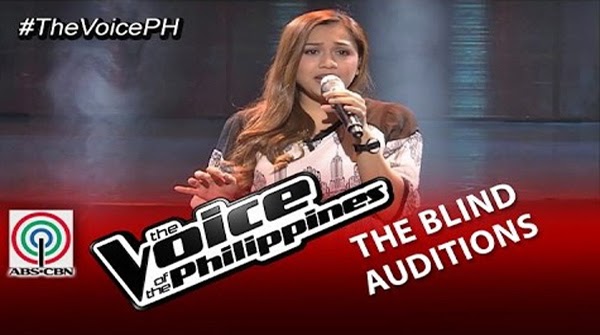 Carol had a sister with a congenital heart disease who died in 2007. With tears on her eyes, Carol confessed that her sister was her no. 1 fan and her performance was dedicated to her.

Carol performed the song “Tattooed Heart” with a very soft beginning. The coaches were silent during her performance; they were listening to her voice attentively. Before the song ended, one of the coaches namely Coach Sarah was convinced and she pushed the red button. Carol jumped with joy when she saw the coach turn.

Carol’s parents were both working abroad that is why they were not with her during that time. Coach Leah asked her about her inspiration in singing and she answered her mom, dad and sister. The coaches said that she had a very nice voice with a very nice quality but there was this something that they were looking for considering the fact that Tattooed Heart is such a nice song.

On the other hand, Coach Sarah liked her voice and she was so excited for their team-up. The coach also said that she had a very promising voice, it convinced her. We can watch more of Carol’s performance as she advance in the competition.