“The Heart Wants What it Wants.”

Can this line be speaking for the truth? The answer would depend on the person in question but this is the title of Selena Gomez’s heart-breaking debut performance at the 2014 American Music Awards which moved fellow singer and song writer, Taylor Swift, to tears.

The pop star was clearly empathizing with her friend’s pain, feeling it as her own. However, that did not stop some of her fellow audience members from piercing her with arrows of serious side eye. 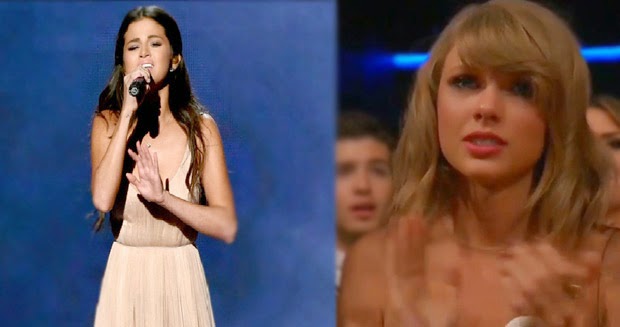 Swift had been through a number of emotional turmoil during the show on Sunday night. If she wasn’t crying with Selena, she would be dancing with Justin Bieber’s, and even Lorde’s, on-off love in the audience.

During the event, the young singing sensation has also performed her don’t-cross-me single entitled “Blank Space” on live television for the first time.

She was presented by Diana Ross her “The Dick Clark Award for Excellence”, which she accepted with her true colors, after she had done her fiery performance where she played out her boy crazy, man-eating persona.

Swift admits that she was blown away by the award she received from Ross, whom she looked up to for the latter had stood up for herself so many times in a time that it was unusual for a woman to stand up for herself. She could help but feel an overwhelming gratitude.

She feels so “unbelievably ecstatic” that it was her that the AMAs chose to honor the Dick Clark award, qith Dick Clark she considered as a visionary who fought for music to be at the forefront of people’s minds and televisions.

Taylor also took the opportunity to address her anti-streaming stance, thanking all her fans for purchasing over a million copies of her last three albums and claiming she loved getting to know them through talking online.