A woman was abducted by men riding a van at EDSA-Magallanes last September 30. After being violated, the girl was thrown all the way to Malolos, Bulacan.

According a report by ABS-CBN’s TV Patrol reporter, past six o’clock in the evening of September 30, 21-year old student we will hide under the name ‘Maricel’ was walking home down EDSA-Magallanes. 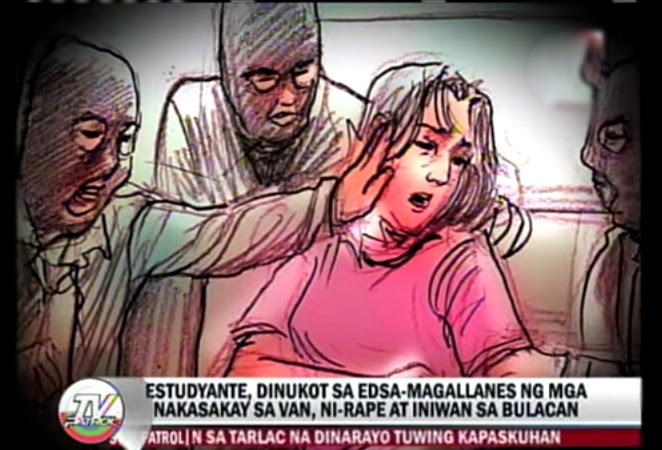 That was when she noticed a slow-moving van that seems to be walking her and following her closely. When the van stopped in front of her, Maricel was pulled by unknown men inside the van.

Maricel initially thought that it was a hold-up. To her shock, not only was her bag grabbed, but her arm as well.

According to the victim, aside from the driver, there were three other men inside the vehicle wearing bonnets to cover their faces. These men immediately began assaulting her and the last thing she remembered was that she was forced to sniff something on a handkerchief.

It was 3:00 a.m. the next morning when Maricel regained consciousness at the side of a highway road in Malolos, Bulacan. The clothes under her waist have gone missing and her whole body was in excruciating pain.

Fortunately for Maricel, someone immediately came to her aid. She was fed and clothed by her rescuer, who then brought her back home.

A recent incident similar to that of Maricel had also happened to a 14-year old girl who claims to have been abducted by men riding a van while she was on her way to school at Kalayaan Avenue, Makati.

The child said that there were two men in the vehicle other than the driver. There and then, she was violated but she managed to escape when the van went to stop by a gasoline station.

According to Insp. Maureen Eva Gutierrez, HEPE at the Women and Children’s Desk of the Makati Police, they are still unable to pinpoint if the same group of men were involved in these two separate cases. However, they are doing their best in performing the investigation of the incidents.

It is advised that the parents should take caution in monitoring their children on their way to school and back home. The ‘Buddy System’ may also work wherein minors get to go home together, especially during nightly hours.

If ever going home alone is inevitable, it is encouraged that one should blend and mix in along with other civilians.

ofw-admin - October 1, 2015 0
Civil-Service-Exam
Even before Mayor Rodrigo Duterte has announced his decision to run for president in 2016, a group of businessmen has pledged to donate P1...

ofw-admin - February 20, 2015 0
celebrity
After around six years of negotiations, Manny Pacquiao and Floyd Mayweather Jr had finally made an agreement to finally fight each other in Las...

Horrifying Experience Tourist Kneels Down and Beg for an iPhone 6...

ofw-admin - November 6, 2014 0
business
The netizens seems to have a lot of topic and talk these recent days for another incident had become viral recently. This case is...

ofw-admin - November 27, 2014 0
celebrity
“The Heart Wants What it Wants.”Can this line be speaking for the truth? The answer would depend on the person in question but this...

Top 7 Simple Habits That May Cause and Give You Cancer

ofw-admin - March 7, 2015 0
health
We hear news of celebrities getting cancer and dying of the illness. Their stories are televised and we become aware of it effects not...