It would be a surprise if anyone wouldn’t recognize the yellow fluffs of happiness they call the “Minions” from the movie “Despicable Me.”

Here is great news for fans of these lovable creatures. A teaser trailer was revealed last Tuesday by Universal Pictures and Illumination Entertainment that featured these creatures on an upcoming comedy adventure with a title of “Minions.” 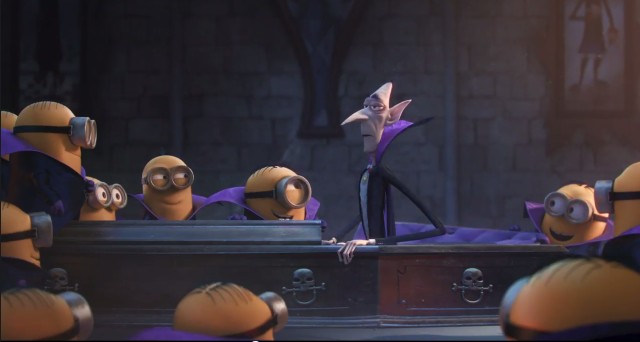 In the trailer, it appears to be that the little yellow creatures seems to know and use some Tagalog words just like in their previous movie, “Despicable Me 2”.

A video of the Minions speaking to each other also went viral on social media last year. In this 48-second video, it sounded as if the little creatures had been speaking in Filipino. Netizens claimed that they uttered Filipino words such as “narito na” and “ikot” in a scene where a group of minions were trying to replace a light bulb.

At the 48-second mark in the freshly-released trailer for the spin-off movie, one Minion could be heard shouting a line which sounded much like “Tara tropa”.

The story of the new film is said to begin “at the dawn of time”, according to a narration in the trailer.

It is said that the minions started from being single-celled yellow organisms that evolved through the ages, living for the sole purpose of serving the most despicable of masters. Unfortunately for them, they have been continuously unsuccessful at keeping these masters and soon, the minions found themselves in the verge of depression, unable to find the perfect person to serve.

That was when a Minion named Kevin decided he had to do something. Along with rebel Stuart who loves his bananas, and little frightened Bob, Kevin ventures out into the world and they have an adventure of a lifetime in search of a new evil boss for his brethren to serve and follow.

This trio soon found themselves in New York during 1968, 42 years B.G. (Before Gru). This journey takes them to their next potential master, scarlet Overkill who is voiced by Sandra Bullock.

“Minion” opens in theatres in the Philippines in July 2015, featuring a soundtrack of hit music from the 60s.

Featuring a soundtrack of hit music from the ’60s, “Minions” opens in Philippine theatres in July 2015.