A few days before Pacquiao’s upcoming fight versus Chris Algieri in Macau to defend his WBO Welterweight Championship title this weekend, the ad has been released which hinted at a future fight against Mayweather. 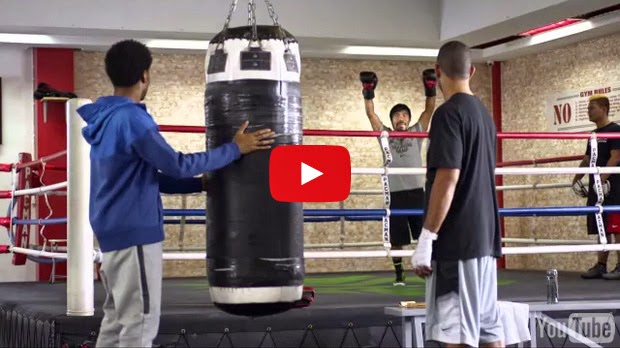 A part of Foot Locker’s “The Week of Greatness” campaign for its much awaited sale, the advertisement makes fun of the potential super fight between him and the elusive Mayweather, Jr which had been causing a lot of media hype lately.

The ad begins with two men in the boxing gym is talking about Foot Locker’s promo and eavesdropping Pacquiao, thinking that the thing the people “wanted” was a fight between himself and Mayweather.

Pacquiao is 2-2 in his past four bouts, splitting both win and loss with him losing against Timothy Bradley in the June 2012 fight and stoppage against Juan Manuel Marquez back in December 2012.

In his most recent fight last April, Pacquiao, aged 35, reclaimed the WBO welterweight title by a unanimous decision, a victory against Bradley.

On the other hand, in his most recent fight, Algieri (20-0, 8 KOs) took Ruslan Provodnikov’s WBO 140-pound belt by a split decision in June. Algieri rose from three first-round knockdowns and fought with a right eye that was nearly closed shut.

Algieri hailed from Long Island, New York, and will have the privilege to challenge Pacquiao in his first professional appearance on foreign land.

Although the fight between Manny Pacquiao and Floyd Mayweather Jr isn’t any closer to coming to reality anytime soon, one can still simply have fun watching the commercial ad where Manny is seen rejoicing while thinking that he’s finally going to have a bout with Mayweather.

After all, this is one of the fights the whole world would want to see and behold.