Real name Gabriella Annjane Umali Cruz, or more known and endeared to us as Ella Cruz, was born on August 17, 1996 in Angat, Bulacan, Philippines.

This young lady is a Filipina actress, model host, product endorser, commercial model and dancer, having been active in the Showbiz industry since 2006 up to present.

This spirited lady was often referred to as The Shining Child Star, and was discovered in 2004 when she took part as a contestant in Little Miss Philippines, a pageant for young girls which is annually held in Eat Bulaga! 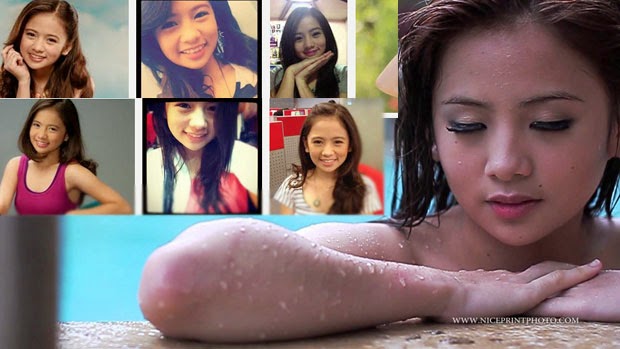 Although she didn’t bag the contest, Ella was able to find fame by appearing in some drama series and soap operas on television like Majika and Atlantika. It was her role as Tin-Tin in Super Twins that rode her on a wave to mainstream audiences.

She joined the hit comedy gag show, Goin’ Bulilit in 2007. She is also a host of Tropang Potchi.

On November 29, 2008, she won her first acting award when the Filipino Academy of Movie Arts and Sciences Awards cited her as the Best Child Actress for the movie Resiklo.

She became more popular in the country after being a part of ABS-CBN’s Star Magic, known also as the teen Christine Reyes in the ABS-CBN TV series entitled “Dahil Sa Pag-Ibig”. She starred alongside Francis Magundayao, who in turn, played the role of teen Piolo Pascual.

Ella is considered as a good role model to her young fans due to the fame of “Aryana” and she seems to have a good grip on balancing out her acting and studying well. She excels in academics and extra-curricular activities as well, being active in campus contests such as sports, choir, dramatics and oratory.

Our very own Ella Cruz wants to be an inspiration to every generation, especially to little kids who have big dreams like her.

“Be an inspiration to every generation,” was her motto in life.

Ella describes herself as simple and friendly and her general interests appear to be dancing and swimming. Her favourite things include seafood, sushi, chocolates, dog, pink and gold, coke float and cute and loveable, cartoon character Stitch.

She loves big bikes a lot and she also adores adventurous activities such as wall climbing, caving, scuba diving, racing and many more, but says she is not boyish. She is a fashionista.

She is a fan of One Direction, Taylor Swift and Selena Gomez. She looks up to Filipino actors and actresses as well, namely Jericho Rosales, Anne Curtis, Angel Locsin and Judy Ann Santos.

Ella has one brother and two sisters and her family and relatives tend to call her “Lela” despite her famous stage name. Amazing enough, Ella has her own foundation, Ella Cruz Foundation, for she has that strong love for helping children, especially the poor and sick ones.

She used to go to Colegio De Sta. Monica De Angat, a Catholic school in Bulacan where she attended both her elementary and secondary schooling.

Being a freelance artist, Ella appears from one television show, from one network to another. She decided to settle for only and signed up as an exclusive actress under ABS-CBN.