Home health Ebola Infestations in Makati, Rizal, Tarlac and Other Cities of Philippines a...

A wave of panic swept through unsuspecting citizens as the news of the deadly ebola virus finally reaching the Philippines and infecting residents in cities in Metro Manila had began circulating on various social media sites in the internet.

According to Viral.Ninja, the site behind this panic-inducing hoax, a particular unidentified town in Quezon City had 22 confirmed individuals that have been infected by ebola. It is said that the city is now under high alert and residents were even advised and encouraged to remain at home. 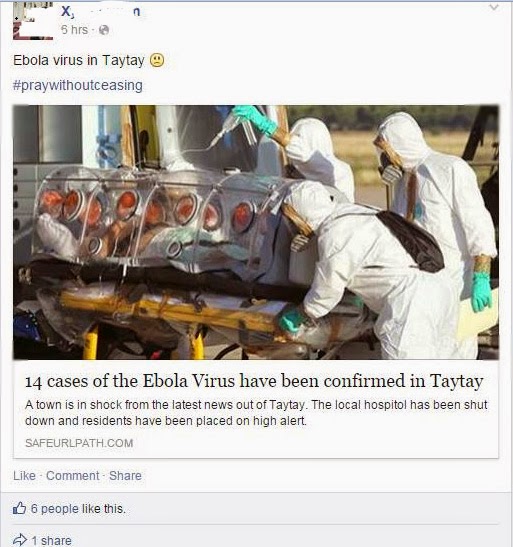 The site also reported that an unnamed hospital in the locality had been shut down due to the virus that is said to have come from four passengers from Liberia.

However, the government officials never had a part of this and it was confirmed that this news was indeed a hoax. The spread of the virus nationwide is absolutely feared and such news, hoax it may be, could cause unnecessary panic across the country.

Taytay was also named as an area with Ebola infection cases in the hoax news, though the accompanying image of this news, if clicked, would redirect the user to the same news of the virus spreading in Quezon City.

It is universally known now that the ebola virus can spread through direct contact with the bodily secretions of a person infected by the virus. Fever, diarrhea, aches, stomach pain, vomiting, rash, chest pain, difficulty of swallowing and breathing, and bleeding are the signs of symptoms contracted by the victim though it is not limited to just that.

The Department of Health is currently doing what it can trying to give health workers and citizens proper orientation to prevent the virus from entering the country.

Although many are not confident with the Department of Health’s preparedness to combat the virus and prevent the spread of the infection, making up hoax news doesn’t help with the problem at hand.

People are encouraged to first check the information being posted online before believing it.