Whether we like it or not, we cannot deny that technology had taken over our lives. More and more people prefer socializing in various social networking sites because they feel more comfortable and have the enough time to think of a proper and witty reply.

Many of our teenagers nowadays are addicted to these social networking sites. One of them is Erika Delos Santos, a girl of 15 years. Immediately after arriving home everyday after school, Erika would turn their computer on and log in to her account in Facebook. (Scroll down for Video) 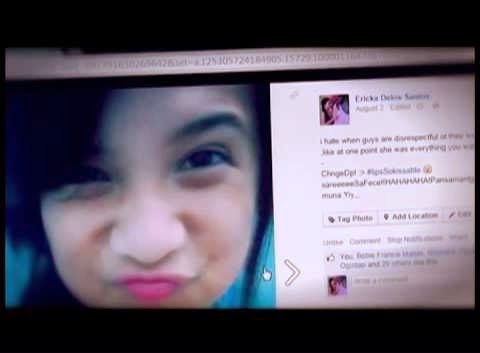 Delos Santos’ cousin, identified as “Richelle”, said that the teenager confirmed that Erika had been logging in everyday, sitting in front of their computer for at most 2 hours.

The family of the victim thought that Erika would eventually grow tired of this pastime of hers but as time passed, she became more and more addicted to Facebook. Then, on February this year, she met a guy online.

Her family thought Delos Santos would eventually outgrow this pastime. Instead, she became even more of a Facebook addict, until she met a man online in February this year.

After meeting a man named Jayson Odolobre, Delos Santos would spend longer hours in front of their computer, chatting away with Odolobre. Eventually, the two decided to meet up and see each other face to face.

It seems that Delos Santos kept this a secret since no one in her family knew that she had already begun a relationship with the man she met online.

For months, Erika managed to keep this relationship hidden until her cousin Richelle accidentally read a message on the girl’s phone one day. Richelle was alarmed and immediately informed Erika’s mother.

Delos Santos’ mother, Irene said that the message showed an angry Erika, claiming that she might be pregnant due to what Odolobre had down to her, cursing at him.

Everyone thought that this was the right solution for the problem but on August 5, Delos Santos asked permission to leave the house to go to her aunt’s house for a Bible study. She never came back.

You can watch the continuation of investigation documented by SOCO, this Saturday at 4:45 PM.