Once again, the Filipino boxing champion shall make his comeback on the ring on November 22, 2014 at the Venetian Resort located in the gambling mecca of Macau, China.

The dubbed ‘Pambansang Kamao’ of the Philippines will be defending his WBO Welterweight Championship against Chris Algieri, a newly minted 140-pound champion. 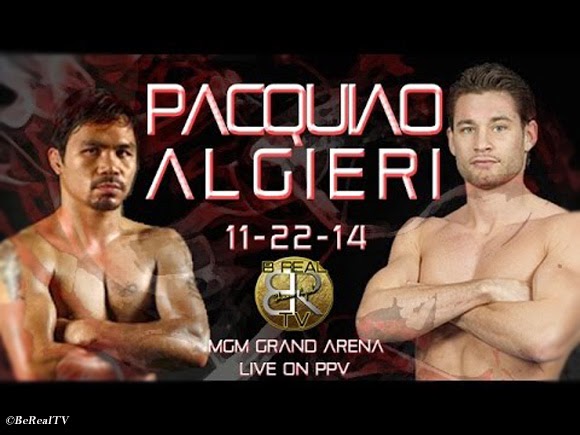 Pacquaio will be entering this competition with a two-fight winning streak, making up for his defeat by toppling Timothy Bradley and regaining a welterweight title in April.

On the other hand, Chris Algieri remains undefeated but not very well-known until recently. After taking down last June Team Pacquiao’s initial first choice for the fight, Ruslan Provodnikov, former junior welterweight champion, Algieri earned this bout with Pacman.

The 30 year old native of Huntington, New York made a good fight with Provodnikov, as he fought back from two early knockdowns and an eye gone swollen against the Siberian Rocky. In the end, he managed to grab the title from his competitor.

This victory of his gave him the chance of a lifetime to go head-to-head with one of the most renowned superstars of the boxing world.

The fight between the two will be broadcasted on televisions across the globe by HBO pay per view on November 22, 2014 at Cotai Arena at the Venetian Resort in Macau, China with their bout as the Main Event.

With a big fight like this upcoming soon their month, experts began to analyze and break down which among the two magnificent boxers have what it takes to overpower the other.

When it comes to boxing ability, the experts made an assessment made just on pure boxing skills. It seems that Algieri here takes the nod. He is observed to be a better technical fighter with his jab, and he uses his length and reach to limit the offensive opportunities of the slugger.

Power, on the other hand, goes to Pacquiao. Although his power gradually deteriorated over the years, it is undeniably that he’s still well above Algieri in this category.

The Defense category seems to be given to Pacquiao who is more refined than his opponent since Algieri, in his bout against Provodnikov, didn’t do very well in cutting off the ring or working on his jab. Although Algieri has advantages in his length and reach, he never got the chance to employ these against a fighter like Pacquiao.

Lastly, the Pacquiao is on a different level that Algieri has not come across with when it comes to Game Plan. Algieri must make use of his speed, power and ability to cut off the ring if he wishes to have a decent close fight with the Filipino boxer.

Overall, an early prediction about the winner of this bout has been made. It seems it will be Pacquiao unless Algieri does something about it with his heart and pure determination.

admin - November 7, 2014 0
celebrity
The newest hot mugshot guy comes brings out squeals of delight from the internet. This man, who allegedly hates Fox New, goes by the...

admin - March 6, 2015 0
business
We are at the age when a lot of testimonies pop up about earning money while just sitting at the comfort of their homes....

admin - August 18, 2016 0
celebrity
Another high-profile coming out has caught the attention of netizens as Ian King, the wealthy businessman from the family behind Victoria Court and car...

Compensation To those Who Purchased RedBull in Last 10 Years for...

admin - October 14, 2014 0
business
Red Bull customers are to receive only $3 or less in compensation because they did not automatically grow wings instead of the $10 refund...

admin - December 8, 2014 0
Government
A recent report was posted on Rappler recently describing the first-hand experience of its own resident reporter about a security guard who aimed an...