“It’s Not rape, It’s A Snuggle With a Struggle” went te controversial t-shirt print as shown in the photo that writer and poet Karen Kunawicz’s posted online.

This very t-shirt with a message implying the promotion of rape from the boys’ section of the SM Store has drawn reactions of outrage amongst the netizens. 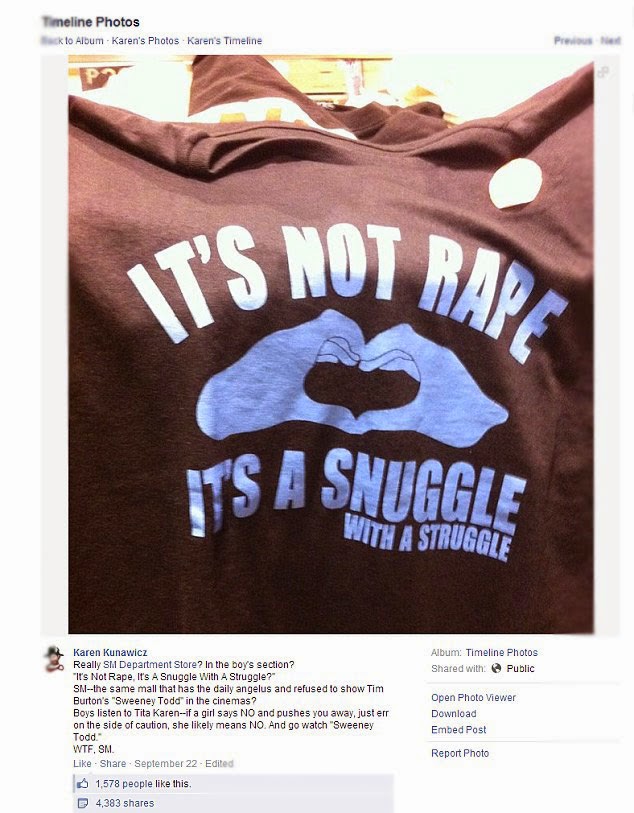 “WTF, SM,” was the last statement on her caption.

After Kunawicz posted the photo at 9:34 p.m., the post had been shared more than 800 times as of 11:16 p.m. from alarmed netizens that were outraged by the t-shirt’s disturbing message.

These netizens demand SM that the shirts should be pulled from circulation and the ones responsible for the production and distribution be sanctioned. They eve went as far as accusing SM of rape culture and sexism propagation.

The person who took the photo told GMA New that the picture was taken at the third floor of the SM Store at SM Megamall.

Director Robbie Dinglasan left a comment on Kunawicz’s post, saying that the t-shirt was part of the collection of the radio show “Boys’ Night Out.” The hosts from the very radio show were signed as endorsers by SM earlier this year. He also added that the shirt is now on the process of being pulled.

However, one of the hosts of the radio show, Sam Gogna, denied that the shirt was a part of the collection Dinglasan had mentioned.

SM is currently investigating how the t-shirt found its way into the shopping mall giant’s stores, giving accentuation to its message to defend and promote rape.

SM assured the public on Tuesday, in a statement posted on Twitter that the shirt will be pulled out immediately.

On a separate note, women’s party-list Gabriela slammed SM for displaying and even selling such a t-shirt with a controversial message. References: abs-cbnnews gmanetwork