A woman outsmarts her abusive drunk boyfriend who had been beating her for a while now through a strange yet memorable phone call to 911.

“I’d like to order pizza for a delivery,” might sound like one of the most typical prank calls but a 911 dispatcher blessed with intuition was able to decipher the true intention of the woman on the other end of the call.

Luckily for the woman, the dispatcher whose identity was revealed to be Keith Weisinge, did not dismiss her call for help as a prank or hoax or any of the sort. 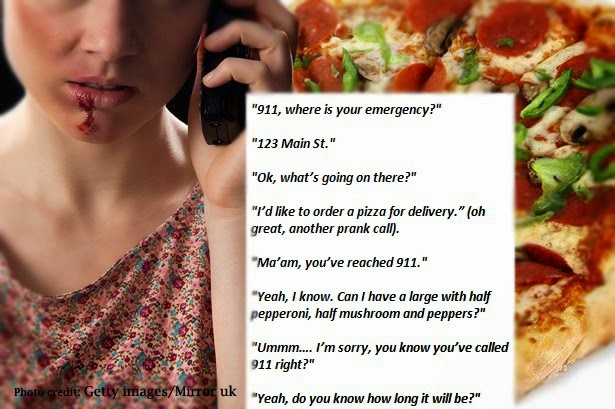 “I’d like to order a pizza for delivery.” (oh great, another prank call).

“Yeah, I know. Can I have a large with half pepperoni, half mushroom and peppers?”

“Yeah, do you know how long it will be?”

“Ok, Ma’am, is everything ok over there? do you have an emergency?”

“..And you can’t talk about it because there’s someone in the room with you?” (moment of realization)

“Yes, that’s correct. Do you know how long it will be?”

“I have an officer about a mile from your location. Are there any weapons in your house?”

“Can you stay on the phone with me?”

“Nope. See you soon, thanks”

The woman called the help line to order pizza according to a call transcript posted on various social media sites. In the conversation exchanged during the call, Weisinger patiently told her she called 911 and not a pizza delivery company.

The woman firmly said she knew that and that’s when the dispatcher realized something was terribly amiss and got an idea that there might be someone else in the room with the woman—and that someone seems to be oblivious of the fact she called 911, thinking she was only ordering pizza.

Although the woman could not directly state her situation to the dispatcher, she was able to disclose her location to the “pizza delivery guy”. The address is 123 Main St.

The operator immediately asked if the woman was in some kind of actual emergency. Once she replied she did, Weisinger knew what he had to do. He quickly notified the officers in the area who were just a mile away from the address given by the woman.

The officers arrived at the scene to find a horrifying a female ‘banged up’ and the boyfriend with her ‘drunk’ as he seems to be completely kept in the dark by the time police reinforcements arrived to save the woman.

She explained that the abusive boyfriend had been beating her for a while. The man was immediately cuffed and taken away.

A quick search of the database revealed multiple other reports of domestic abuse pointing at the same address according to the dispatcher.

Weisinger thought the woman had used a pretty clever trick and it was indeed one of the most memorable calls for him.

A transcript of the 911 call was released on sites online. References: dailymail kickerdaily