Croatian Boxer Vido Loncar unexpectedly knocked down the referee before the official would announce the result.

His opponent Lithuanian Alguirdas was seen gaining scores against him at the midst of the match. Thus, the referee glimpsing that Loncar is about to lose, he signaled to stopped the fight. 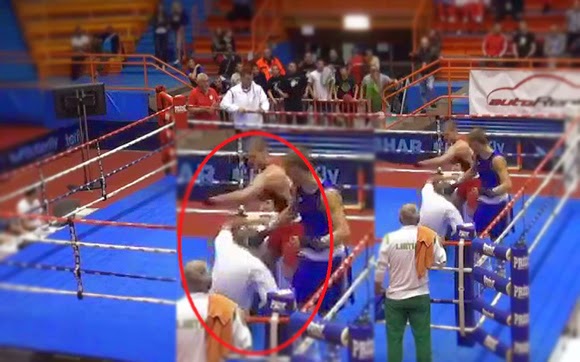 The referee then commanded the two boxers to position in their designated place while waiting for the final decision of the game.

The official referee has been supposed to raise the arm of the champion. However, before the referee could state the decision, Loncar suddeenly punched him right to the head knocking the referee down.

According to the report, Loncar still manage to blow as the victim lying down the floor.

Even Baniulis, being surprised couldn’t stop the boxer from attacking the referee not until; someone from the crowd pulled his legs. Meanwhile, the event official took the loser boxer away from the crowd expecting to face a heavy case. He was also banned to engage in boxing sports for long time.

On the other hand, the victim has just suffered minor injuries after it was brought to the hospital for early treatment.