A burglar was arrested when firemen flushed him out from a sewer after he jumped and was stuck for two hours for the terror to be jailed, in Mother Ignacia Street and on Timog Avenue.

It was reported that the suspects for clutching a lady’s handbag last Tuesday around seven (7) in the morning. On the report from Ervin Espadilla, Barngay South Triangle Deputy has aired that the names of suspects are Jonathan Gamboa and Efren Garis. 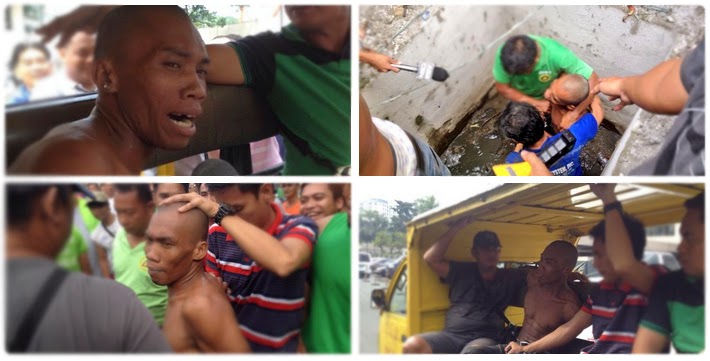 According to the authorities, Gamboa likely stayed inside the sewer after he jumped to in order for him to escape from being arrested.

Meanwhile, the said authorities patiently watched on the two both ends of the sewer which is located along Mother Ignacia Street and on Timog Avenue where Gamboa was hiding.

He then stayed from the sewer for almost two hours. However, police officers and respective authorities sprayed water into the sewer and finally he came out.

While the other suspect Garis was captured by tricycle drivers nearby who help to catch him up.

Additionally, when Gamboa was told to confess, he initially denied. However, when they reached the police station, finally he admitted that he took part on the crime together with Garis. And also declared his main purpose on committing theft was that he badly needed the money for survival.

He further revealed that his wife had left him thus he was forced to snip a lady’s handbag. The two suspects were later found to be imprisoned previously due to illegal drug use and theft after they were interviewed.

Meanwhile, the victim is expected to file a case against the two criminals: Garis and Gamboa as encouraged by the Barangay South Triangle officials. Reference: abs