Home local It is Literally Raining Ice on Makati

MANILA, PHILIPPINES- Residents and civilians report ice pellets had begun to rain down on the streets from the skies of Makati City late Wednesday afternoon, September 17, giving way to a wave of online activity based on the rare occurrence.

While in a cab along Ayala Avenue, a Rappler editor reported to have seen ice pellets falling from the sky. People who witnessed the out-of-the-ordinary weather event posted photos of the incident on Instagram and Twitter. Netizens, then took notice of the strange meteorological event in the Philippines. 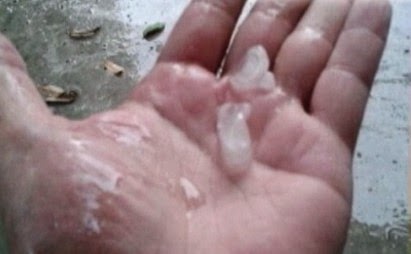 Forecaster Jun Galang from state weather bureau PAGASA told Rappler on Wednesday about how the ice pellets formed. The incident was due to cumulonimbus clouds, a type of thunderstorm cloud that had its effects on Makati and other surrounding areas.

“It’s only normal when there are thunderstorm clouds,” said Galang in a mix of the Filipino and English languages. “It is possible that, from the clouds, the ice pellets are originally big in size but they get smaller as they get near to the ground.”

At around 4:45 pm, Wednesday, PAGASA reported possible thunderstorms that could affect parts of Metro Manila, specifically Manila, Las Piñas, Baclaran, Parañaque, Pasay and Taguig. Other areas are also expected to experience heavy rain within the next two hours.

Galang clarified that the that the phenomenon is not a hailstorm for a hailstorm occurs when precipitation come in the form of hailstones, chunks of ice that were formed in cloud layers with very low temperatures, which are usually associated with thunderstorms.

According to Texas A&M University, in thunderstorm clouds, strong wind updrafts and forces the rain to go up. The rain drops then, freeze and turn into lumps of ice. Some of these hailstorms, after growing larger through each collision of water droplets, could grow as large as a grapefruits or oranges.